40TH ANNIVERSARY SINCE THE DISCO DEMOLITION...a month later because I'm a bum 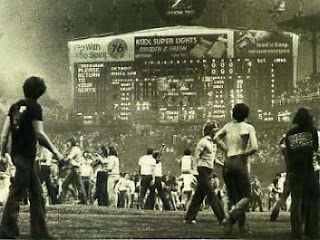 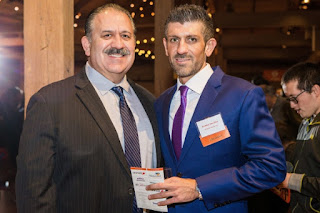 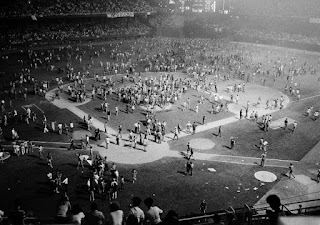 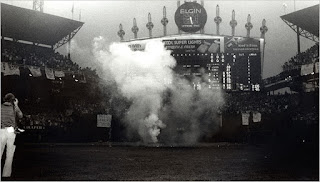 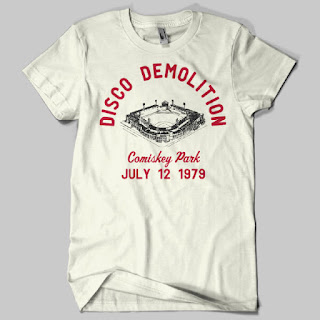 On July 12th 1979, Steve Dahl and Garry Meier, radio hosts on WMAQ1000, set up an event that went totally out of hand. In between the games of a double header, fans were going to be allowed to throw their disco albums on the outfield. Instead, the Bridgeport gabagoos being the way they were, threw smoke bombs, started records on fire, and everybody ran onto the field. The second game was cancelled, and Dahl had a huge fine to pay. Much of the outfield grass had to be replaced.

Unfortunately, I was not watching this at home, because I was working with an Elvis band back then, and we were holed up in Bolingbrook at a place called La Margarita's. It has a different name now, but is still right off Golf Road an Interstate 55. Owned by the late, great Cesar Devolina, who owned quite a few restaurants around the western suburbs, and could often be seen on television commercials during the local news.

Wish I had photos. He were were, in between sets, in the back room huddled around the huge TV. And what do we look like? Well, one guy had a jumpsuit on. That's a given. The rest of us, still mostly broke, were wearing our best outfits. Which just happened to look good on the disco floor at Prime & Tender. I was wearing a salmon-colored shirt with hang-glider lapels and sleeves that, when folded up once, made me look like I was a super-villain. Slacks that made hipster pants look baggy. And I had curly hair, so I looked like Larry Fine from the Three Stooges.

Somehow, in some way, we dodged a bullet by being far away from those crazy nuts at 35th & Shields.

Posted by Wayne Allen Sallee at 1:05 AM