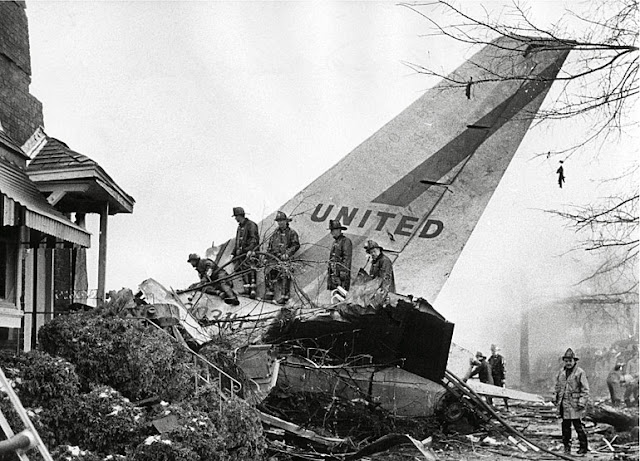 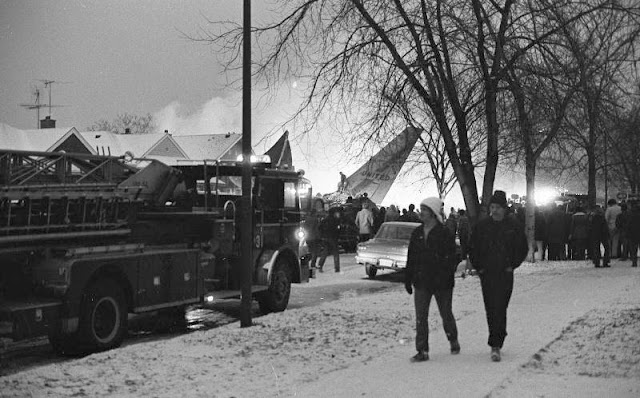 It was a Friday in 1972, I had one class to go, seventh grade at Charles Gates Dawes. Exactly ten blocks south of the crash, unable to see anything but smoke due to the train switching yards at 73rd Street. I always remember the time as 2:37 PM, and never look to see if I was right or wrong. Or close. At 2:45 I would have been on 81st & Hamlin, instead we were kept inside the school, until our parents picked us up. I lived on a straght line down Springfield, a block west, to 85th Street. My father never came to pick me up. He was trying to save lives. The first squad car on the scene, he and Lenny Rizzi watched from Pulaski Road as the United flight passed over the Indian on the roof of the cigar store on 63rd, close enough to make it sway. The sky was gunmetal grey and there was snow on the ground, an early, bitter winter. The Boeing 737 landed over ten houses, destroying six, and snapped in half with the cockpit pointed skyward as bodies from first class lay on garage roofs. This we all heard later, there were no Blackberrys, back then, we were lucky to have three traffic helicopters and static-free radios back then. Social networking meant how much the neighbors, the cops, the teachers, and the fireman were willing to tell. The plane passed over Queen of The Universe grade school, again, if it had been seven minutes later, children would have been on the sidewalks. My dad and Lenny, each 41 at the time, saved at least eight lives, the snow melting to slush from the impact helped put the flames out on bodies dragged to the street. The two of them saw the pilot or co-pilot fall backwards into the flames, though time dims details, and neither speak of that day anymore. Bodies were melted into the coils of seats--everything had coils back then, what house didn't have a chair with duct tape over an exposed piece of curled metal?--another cop picked up a suitcase that had fallen from a luggage bin and my dad saw an arm in the aisle. A female arm, which somehow made it worse. He did not come up until noon the next day, but for odd reasons. There was reason to believe the plane exploded upon approach to the runway at 55th and Central, and that the pilot tried to control the aircraft however briefly. How was it on 9/11, Flight 11 covered six blocks in one second before hitting the North Tower of the World Trade Center? The pilot was trying desperately for that trainyard I mentioned above, bordered by the Tootsie Roll factory and the Sweetheart Cup company. Martha Mitchell was on that plane, ready to be escorted to the Dirksen Federal Building to offer damning testimony about the Watergate scandal. She died. FBI agents were on the scene within minutes of the second squadrol's arrival down Lawndale, the first fire engine only able to maneuver 71st Street, a narrow street, to be certain, two-story bungalows on either side. My father was gone until noon Saturday because the afternoon shift and the graveyard shift were sworn to not mention the quick response time of the FBI agents to the scene, staggered, as if cars had been stationed in a grid around the southeast end of the Chicago Lawn neighborhood. Within years, nobody cared about the oath, Watergate was forgotten. Our daily Lottery started on the day Nixon resigned. My father is 80 now, he served in Korea, and was a copper for 31 years. He spent that same summer, 1972, searching for Billy DeSouza, who disappeared from a carnival in the Scottsdale shopping center. A decade later, a serial killer in a Connecticut jail told police where to find Billy. In a forest preserve past Orland Park, the case was solved with the sight of a curled up skeleton in the knot of a tree. My father entered an apartment to find a tiny girl suffocated by her overweight, drunk, high on angel dust mother. The mother had rolled on top of her in bed. Compounding that, forensics found semen in the girl's diaper. A boyfriend was arrested. This was Chicago, this has always been Chicago. But my father never talks about United 553, though I remember how our house smelled of smoke and blood and, quite honestly, cooked  meat for days. It was simply too frigid to open the windows, and they might not have been able to be pulled shut again. So I dressed for school each morning and put Aqua Velva on my shirt, thinking that I wouldn't smell like bacon as I sat in my seventh grade classes that following week. And time passed, as it does.

The YouTube above was recently released by the CFD, they have quite a bit of archival media, warehouse fires and three-flat fires, pretty much everything. Because the world is all about social media now. In 1997, my oldest niece, Ashley, wrote about her favorite hero. She wrote about my father, who saved people after a burning plane fell from the sky.

Thank you for reading,